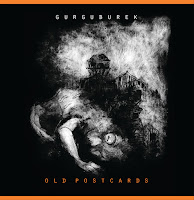 Back during the summer, Cristiano Bocci asked me to write the liner note to Old Postcards, his new collection of music with wind player Tobia Bondesan. Now that the album has been released (on the Depth of Field label), I’d like to expand on my note and offer a few words on what I hear in it.
Although the music conveys a story of sorts, it doesn’t do so by attempting to appropriate narrative forms. Part of this refusal is built into music itself. One of the stubborn facts of music is that it isn’t a literary medium. Not being made of words assembled into descriptive structures, it can’t make reference as a proposition would, or tell a story in the way that a work of prose can. But it does often evoke stories of a kind in the listener, and Old Postcards certainly does this.

Old Postcards isn’t program music, but it does bring in fragments of the extra-musical world through a skillful use of intermedia tropes: Spoken word passages, poetic texts and readymade recordings combine with Bocci and Bondesan’s compositions and improvisations. Through this kind of collage, Bocci and Bondesan are able to convey a non-narrative, impressionistic sense of allusion—a sonic imagism that avoids the literal and instead is episodic and works directly on the emotions rather than on a sense of implicative continuity. Each piece seems to have been conceived of as directly treating and developing an affective motif, having at its core a compact, sharply defined element or seed from which it could grow organically. The seed—a phrase, a scale, a harmony—is the rough equivalent of a visual image, evocative without being plainly indicative of something outside of itself.

Like a postcard. Postcards trade in still images whose associations and web of meanings tend to erode over time. (The image as it fades in time thereby becomes the image of time.) And it strikes me now as I listen again that Bocci’s electronic processing relates to sound as time relates to the image—effacing and transforming it simultaneously.
By taking these sonic images and reworking them through live improvisation, Bocci and Bondesan are in effect sending the listener illustrated dispatches to be used for mapping imaginary places. Alwynne Pritchard: it is not just a rockaby!